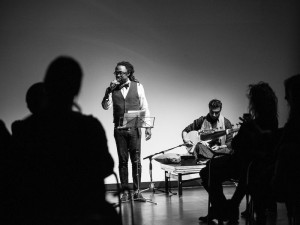 Artistiek statement: As a multidisciplinary artist, my work has consistently in some way or the other, focused on fractured narratives, autobiographical tales that cross borders… hybrid culture and language. Specifically on the ways in which identity is articulated and narrated.

The way we construct each other, insisting on the power of narration and as Bhabha notes that “nations are narrations”. My own imagination has always sought to align itself with all aspects of the creative process like an open ended loop feeding backwards and forwards.., rather than creating linear stories with clear ends. Indeed what has informed all aspects of my art, more than anything else is this journey of the in between worlds places, locals cities, boroughs, provinces, continents and countries…

Where I am, is where I am not, so to speak. Contemporary art practices and migrational diasporas have found me…travelling, crossing borders to new places with new stimulus.

Biografie: Femi Ariel Dawkins was born in St Catherine – Jamaica in 1966. He has lived in the Caribbean, New York, San Fransico, London and Los Angeles. After studying art at the California college of arts and at Skidmore College he now lives and works in Amsterdam, and has shown his work in Los Angeles, New York, Amsterdam, Madrid and Brazil. He is a multi-disciplinary artist whose work is presented in a variety of contexts, from museums and galleries to public spaces, fashion shows and concerts.